A 15 year old girl presented with progressive shortness of breath, hypoxemia and widespread nodularity on HRCT. Childhood bronchiolitis obliterans (CBO) was diagnosed after video assisted thoracoscopic lung biopsy. The patient responded well on corticosteroid therapy. CBO is a rare childhood interstitial lung disease, and usually seen in preschoolers. It is thought to be the result of aberrant responses on infectious agents such as Mycoplasma pneumoniae and adenoviruses.

A 15 year old girl presented at the emergency department of our hospital. She complained of progressive shortness of breath for some weeks. Two weeks before the first signs of dyspnea she had experienced a ‘flue’ with dry coughing and some hemoptoe . She was a current smoker for 2 years. There had been no recent exposures to toxic substances, or pets. At physical examination she was found dyspnoeic at rest and had a decreased transcutaneous oxygen saturation (88% saturation). Lung auscultation revealed fine in- and expiratory crackles at both sides. Chest radiograph only showed subtle basal infiltrative abnormalities in both lungs. Routine laboratory investigation, including CRP, full blood count, kidney function, urine screen and clotting screen (including D-dimere) was normal. Autoimmune screening (ANA, ANCA, anti-glomerular basement membrane antibodies) was negative. Mycoplasma serology was positive (titer 1:160), and one culture of sputum revealed some growth of Haemophilus parainfluenzae.
She was treated with antibiotics (clarithromycine) for 2 weeks, however, without any sign of clinical improvement. Lung function tests showed a combined restrictive and obstructive impairment (FVC 2.5L, 59%pred; FEV1 1.2L, 34%pred), and decreased diffusion capacity (DLCO 58%pred). HRCT scan revealed fine centribolular nodules, homogeneously spread through all lung fields, mild basal atelectasis and no signs of trapped air on scanning in expiration (figure 1). 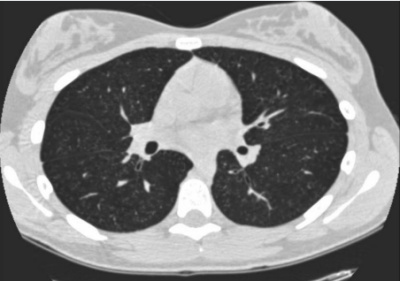 Because of no clinical improvement and no classifying diagnosis we decided to perform video assisted thoracoscopic lung biopsy. Histopathologic examination showed an extensive bronchiolitis obliterans (BO). At some areas, bronchioli were completely destructed, and replaced by smooth muscle actine positive cells. No causative micoorganisms could be identified by additional staining, and tissue cultures remained negative. This resulted in the diagnosis childhood bronchiolitis obliterans (CBO). She was treated with prednisolone 40 mg/day. Within the next two weeks the dyspnea gradually decreased, the transcutaneous oxygen saturation normalized and her physical exercise tolerance increased (normalisation 6 minutes walking test). Lung function tests at 5 weeks follow-up showed substantial improvement: FVC 4.0L (95%pred), FEV1 2.6L (71%pred), and DLCO 73%pred.
Histologically BO is defined as the presence of granulation tissue plugs within the lumina of small airways (figure 2a) and/or complete destruction of small airways leaving a scar (figure 2b). 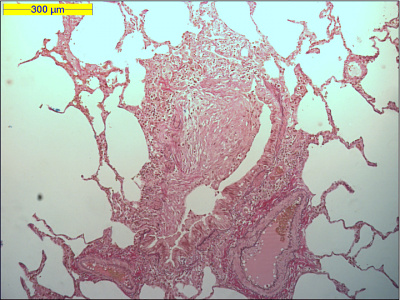 Figure 2a  Lung tissue specimen showing the presence of granulation tissue plugs within the lumen of a small airway. 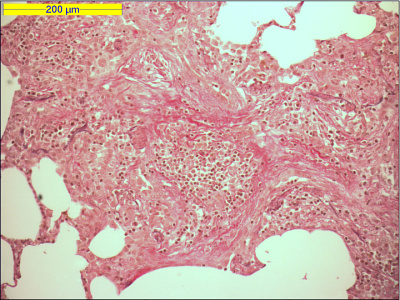 In adults, it has been described following various etiological factors, including drugs, exposure to toxic fumes, allergic reactions, collagen vascular diseases, organ transplantation, or infections. In childhood, BO has mainly been described as a result of infection, including measles, Bordetella pertussis, Mycoplasma pneumoniae, and viral infections. Especially influenza A and adenovirus types 3, 7, and 21 appear to be the agents most often associated with CBO [1]. In our case a semi-recent mycoplasma infection is most likely to be the trigger of the disease.

Recently, a new classification system for ILD in children was proposed by a multidisciplinary working group in North America (http://rarediseasesnetwork.epi.usf.edu/rldc) [2]. In this report, approximately 10% of children with ILD was found to be have infectious or post-infectious processes, such as CBO.
Yalcin and colleagues have described one of the largest case series on CBO [1]. The median age in this study was approximately 2 years. Although the use of immunosuppressive treatment remains controversial almost all patients in this report were treated with systemic corticosteroids. However, only half of these patients showed clinical improvement. Our case report is remarkable because of the relatively high age of onset of CBO, and because of strong improvement of patient’s condition after introduction of corticosteroid treatment, with normalisation of exercise tolerance and substantial improvement of lung function measures.

If you would like to share any comments on this case please send them to wasog@gosker.nl and after peer review your comment(s) will be posted below.